On Wednesday, January 23rd 2019, the Foundation Fiesta Clásica will be celebrating its second anniversary. Same as in 2018, we will be organizing a concert followed by a cocktail reception. This year, we will have the pleasure to welcome back Nemanja Radulović, the virtuoso violinist, along with his String Quintet, The Trills, composed of Guillaume Fomtanarosa (Violin), Frédéric Dessus (Violin), Kristina Atanasova (viola), Anne Biragnet (cello) and Nathanaël Malnoury (bass). The students of the Foundation (choir and symphony orchestra) will complement this exceptional musical cast.

For additional information about this event, do not hesitate to contact us by phone (+1)809-980-5000, or by email at contact@fiestaclasica.org

Nemanja Radulović is coming back

It is an understatement to say that Nemanja Radulović had been charmed by the Dominican Republic and by the warm welcome given to him by the public in January 2018. This is why we have mutually agreed to repeat this wonderful musical experience with a brand new repertoire.

Nemanja Radulović studied at the Faculty of Arts and Music in Belgrade, at the Academy Walter Stauffer in Cremone with Salvatore Accardo, at the Conservatory of Paris with Patrice Fontanarosa, and he has worked with Sir Yehudi Menuhin.

In Paris in 2014, Nemanja Radulović received the award for Best Soloist from the french music award ceremony “Victoires de la Musique”. Public from all across the globe are enthusiastic about his virtuosity, his audacity and his fiery interpretations. He shakes the boundaries of classical music, and experiments with innovative musical combinations. Deutsche Grammophon has made him their exclusive artist.

He was invited to perform by the Munich Philharmonic, the Deutsche Symphonic-Orchestra of Berlin, the Staatskapelle Dresden, the Royal Liverpool Philharmonic, the Tokyo Symphony, the Orchestre Symphonique de Montréal, the NDR Radiophilharmonie of Hanover, the WDR Sinfonieorchester of Cologne, the Orchestre Philharmonique de Radio France, the Belgian National Orchestra, the Orchestra Sinfonica Nazionale della RAI of Turin, the Orchestra della Toscana, the Royal Philharmonic Orchestra, the Copenhagen Philharmonic and the Bilbao Orkestra Sinfonikoa…After his 2018’ tour that took him to Japan, South Korea, Czech Republic, Sweden, United Kingdom, and Germany, he will be performing at the Théâtre des Champs Elysées in Paris on December 13th 2018…And on January 23rd 2019, he will be performing for you at the Palace of Fine Arts of Santo Domingo.

On this occasion, he will be performing with the String Quintet The Trills, composed of Guillaume Fontanarosa (violin), Frédéric Dessus (violin), Kristina Atanasova (viola), Anne Biragnet (cello) and Nathanaël Malnoury (bass). 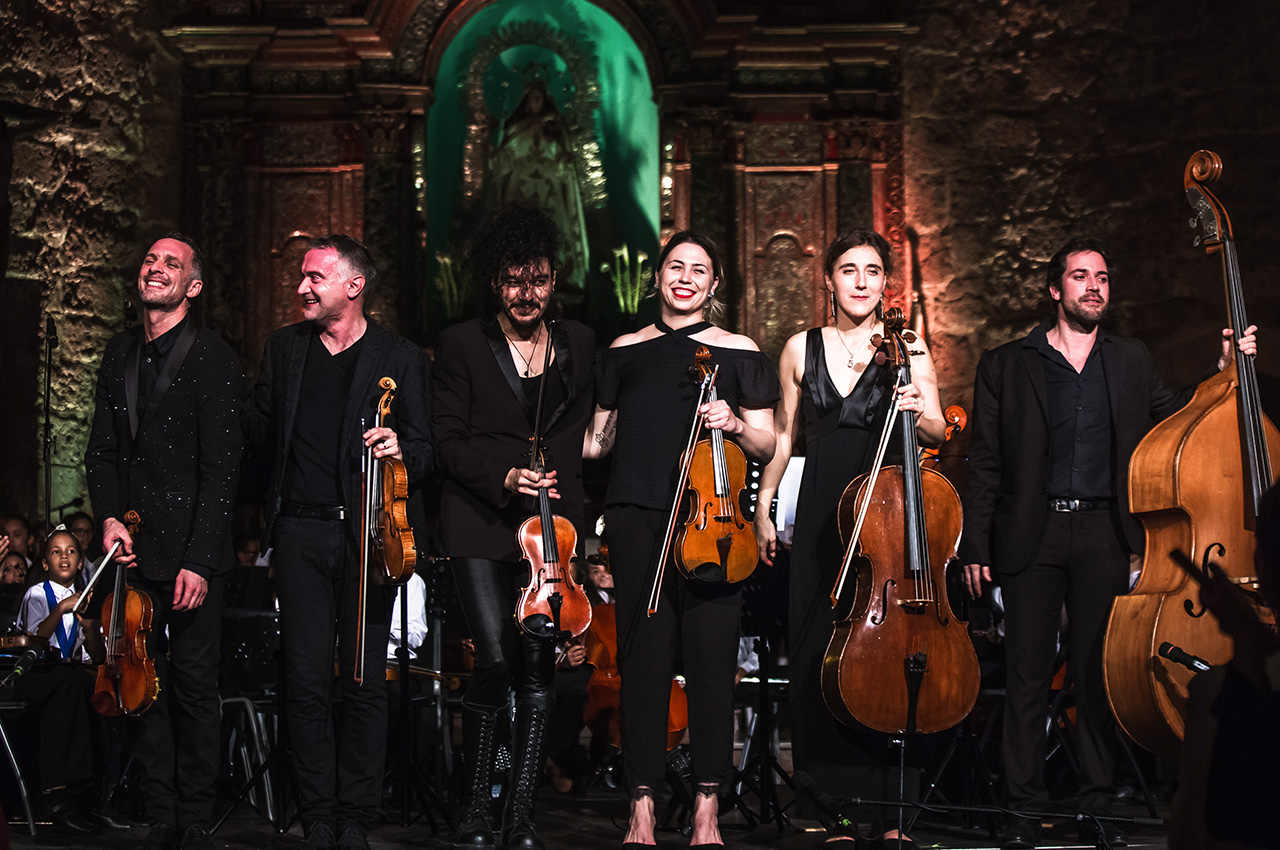 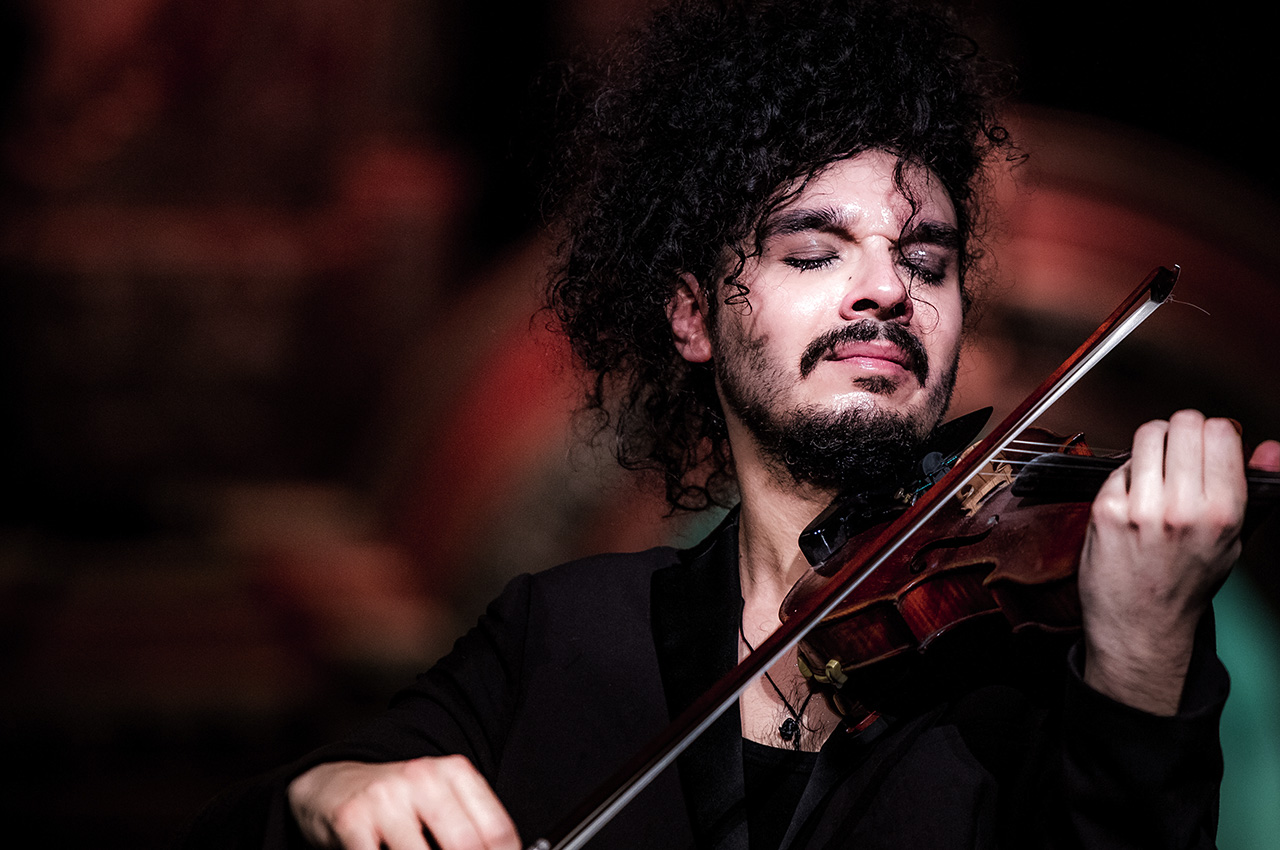 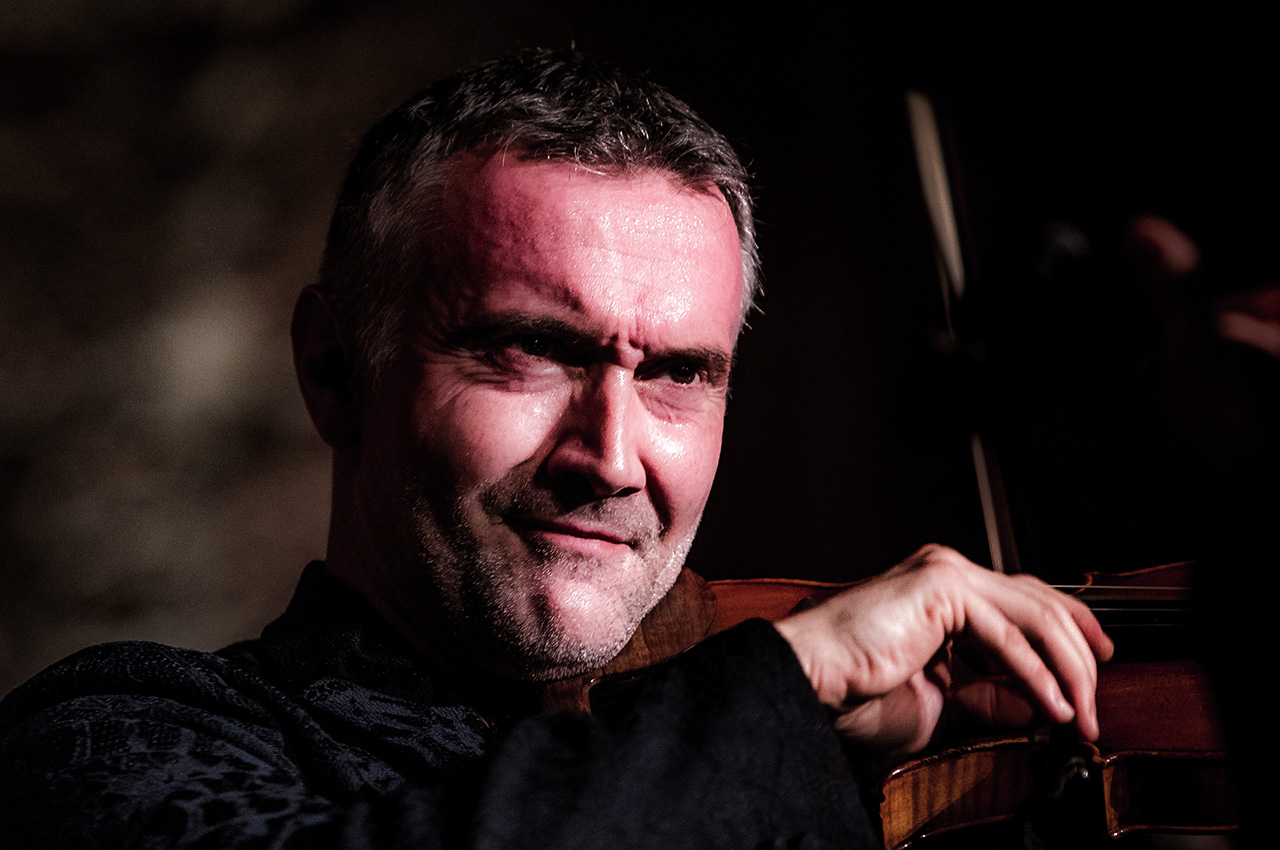 The Choir is made of 60 students who rehearse 3 times a week under the musical direction of José Andrés Briceño, assisted by Lucymar Melendez and Carliana Rodríguez. They also get the educational support of Kazuko Taki, sent to us by the Japan International Cooperation Agency (JICA). The Choir’ repertoire includes classical works such as Ave verum Corpus from Mozart, or Messiah from Haendel; but it also includes traditional and popular pieces such as “El Campo está florido” or “Angel para una tambora” from Juan Luis Guerra.

The Foundation’ Juvenile Symphony Orchestra was created in July 2017. Made of 75 musicians, it has the traditional structure of symphonic ensemble: strings, woodwinds, brass and percussions instruments. The Orchestra has among its repertoire close to 30 pieces, ranging from Tchaikovsky to Beethoven and Juan Gabriel. Under the direction of Musical Director Eduardo Abi Harb, the students rehearse every day, Monday to Friday, either in small groups or all together during general rehearsals. Solfeggio lessons round off this training, which implements the pedagogy successfully developed for 40 years by El Sistema.

Both the Choir and the Orchestra are regularly invited to perform in front of a public: the 2018’ Festival of Music, the Christmas Concert of the Colonial Zone, the French celebrations of the 14th of July, the Tree of Hope…these performances are an essential part of the social and educational work that the foundation is fulfilling. Several videos can attest to this commitment, they are available on our YouTube channel 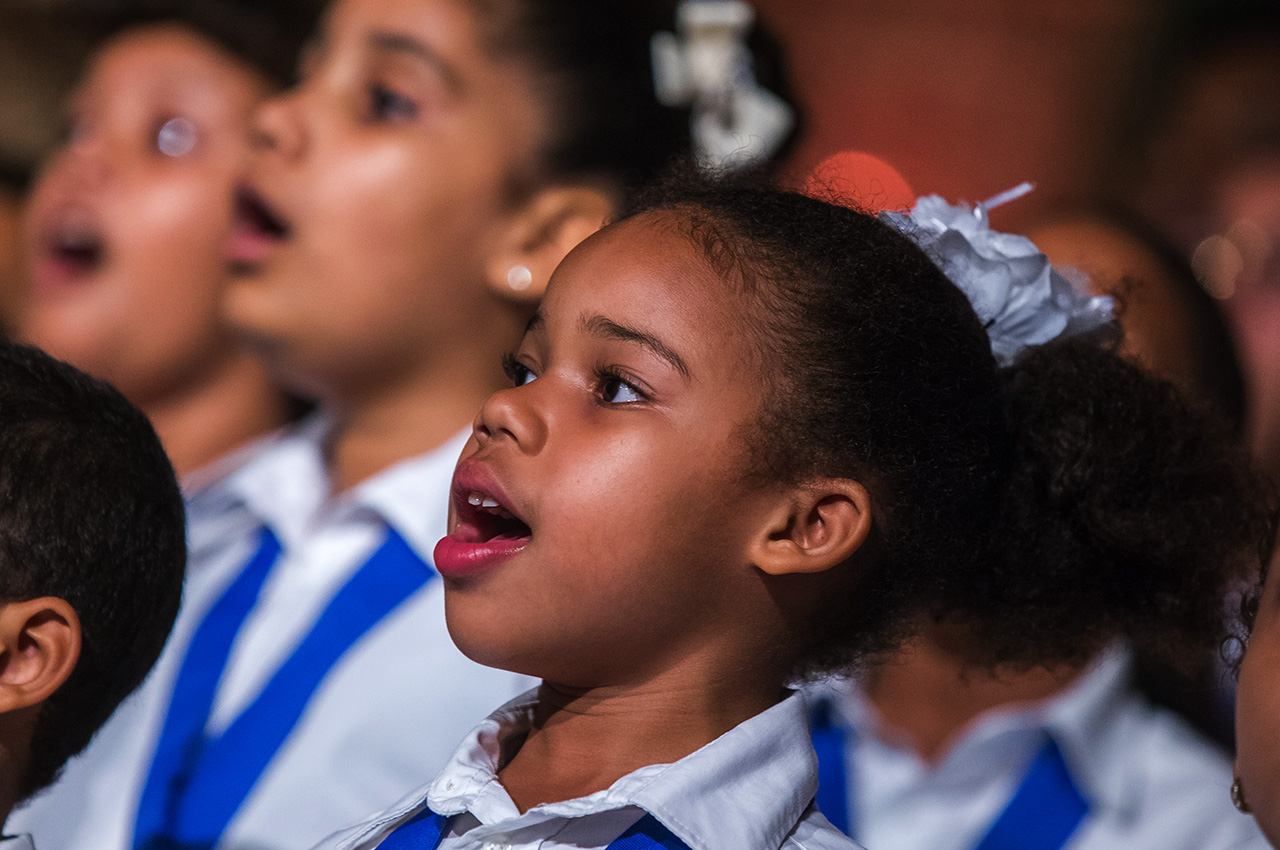 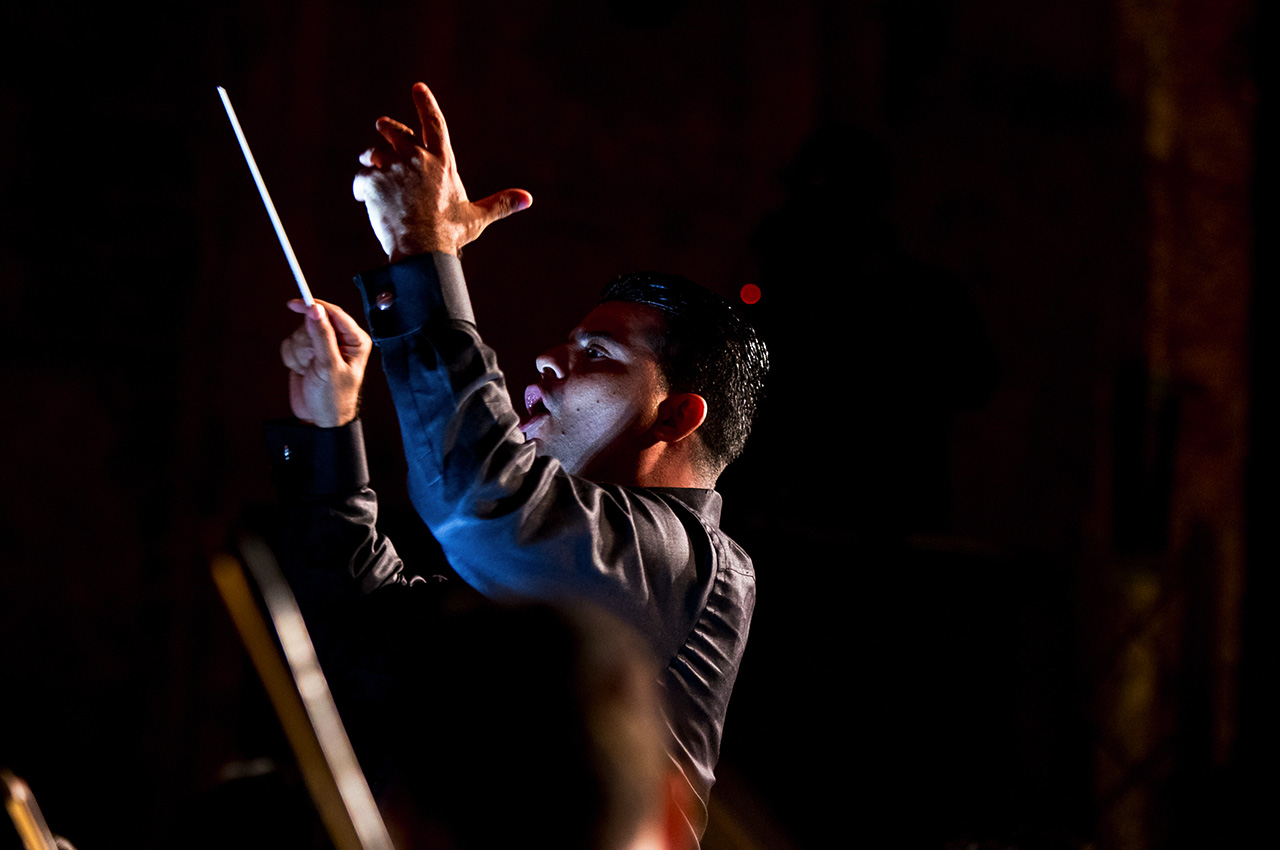 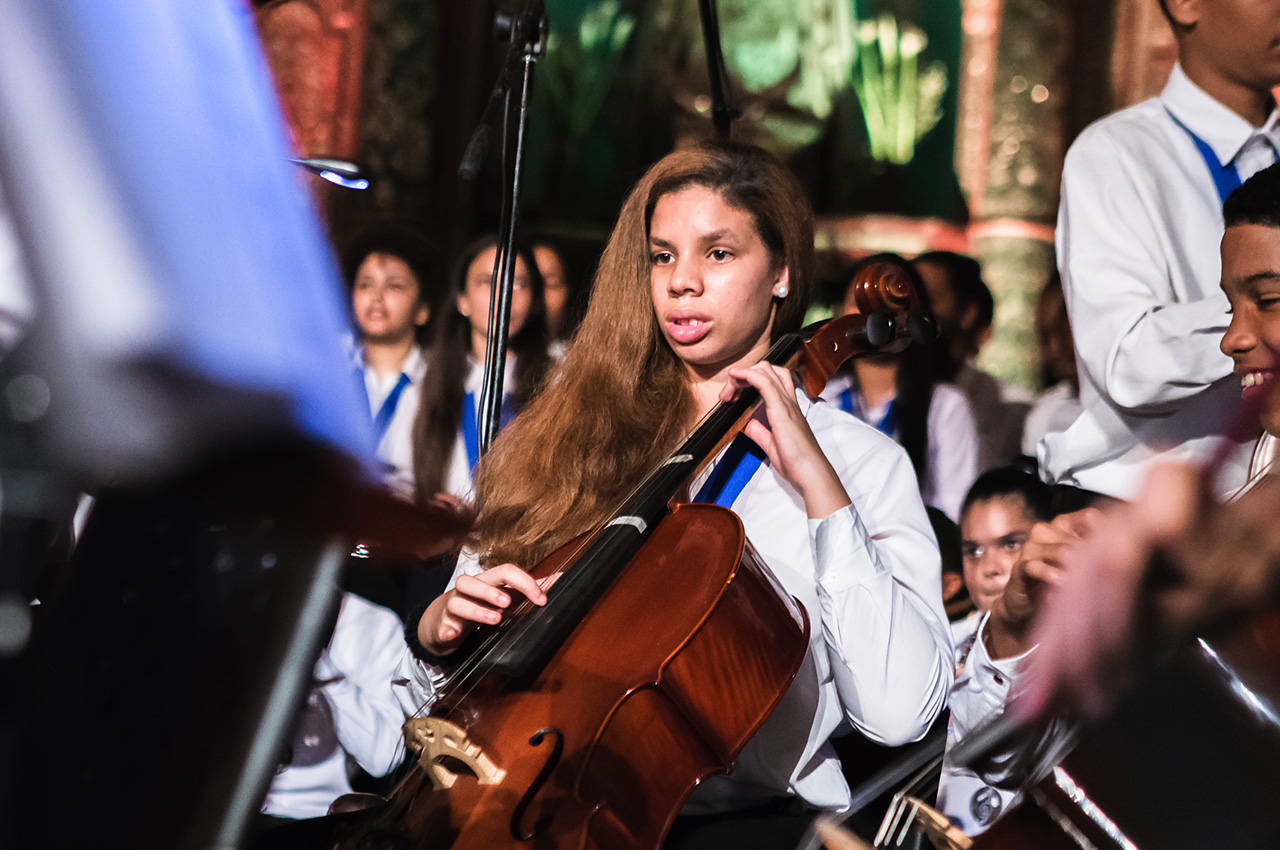 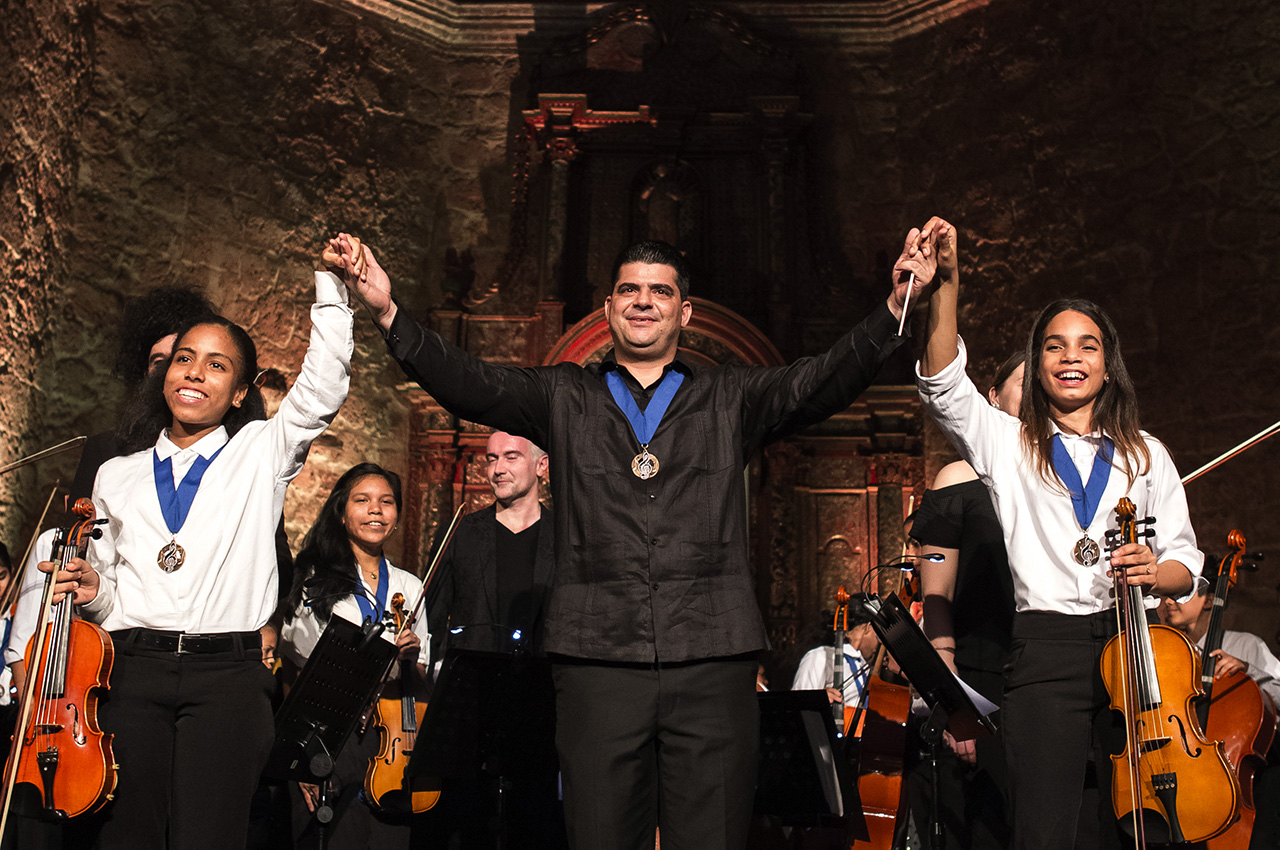 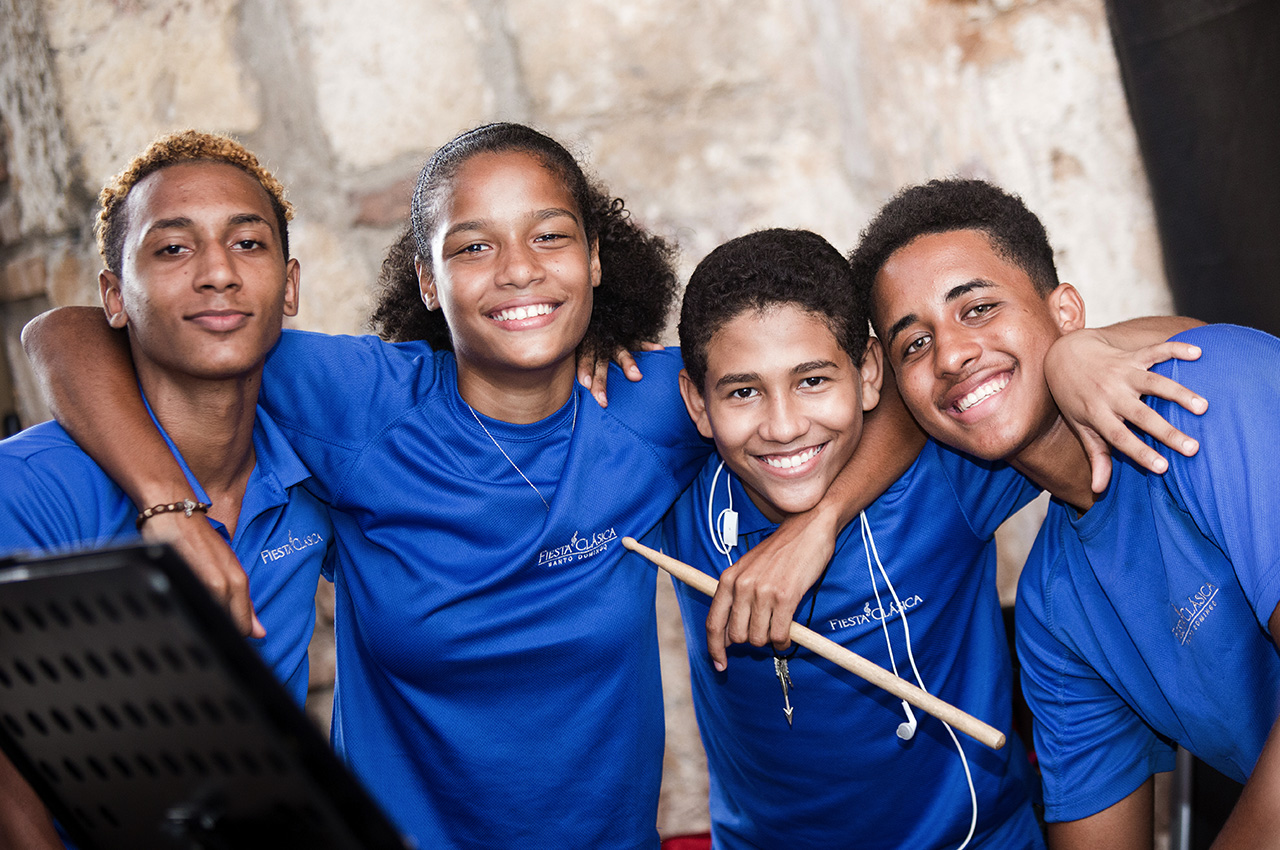 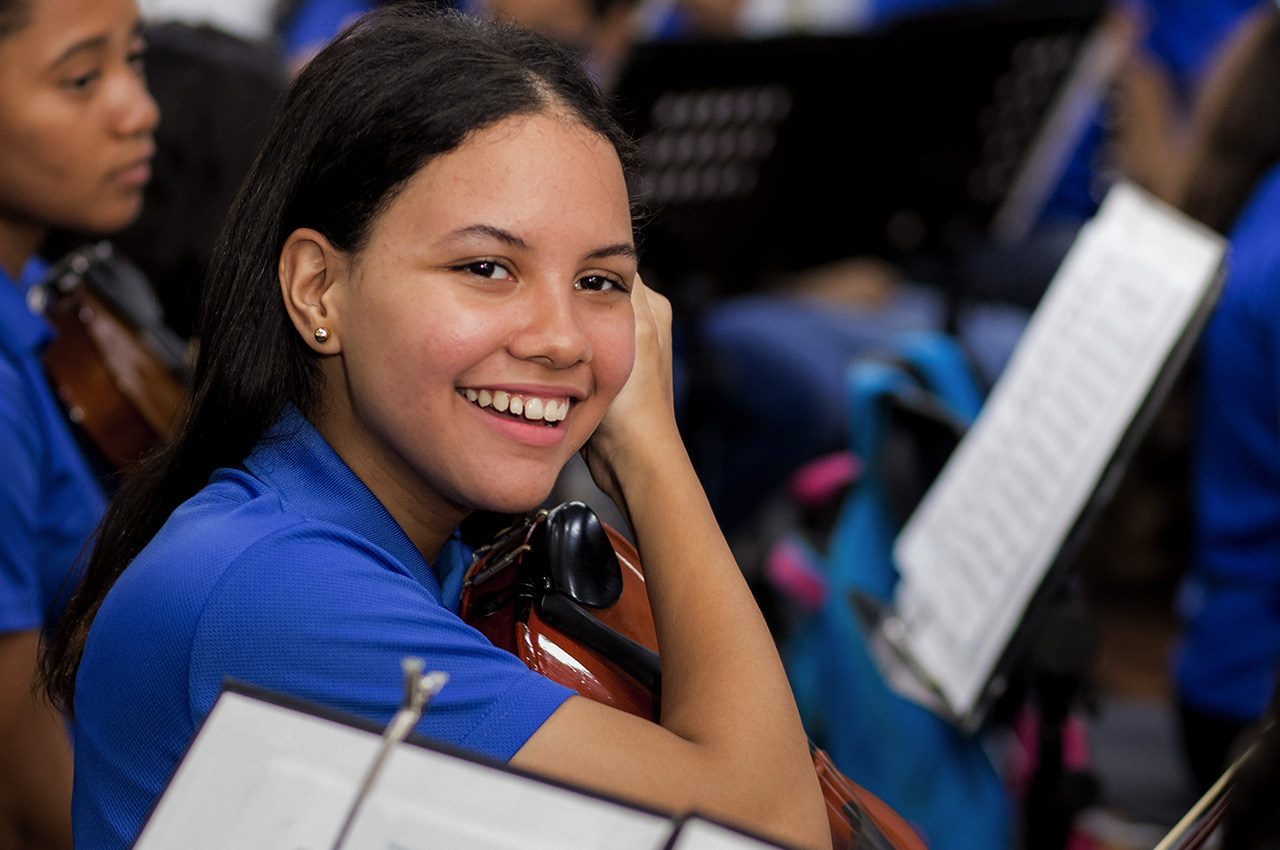 We have chosen the Palace of Fine Arts of Santo Domingo to celebrate our second anniversary. Inaugurated in 1956, this neo-classical palace of 140,000 square feet houses the main cultural organizations of the country, such as the National Conservatory of Music, the National Symphony Orchestra and the National Dance School.

Two areas are opened to the public: the Fine Arts Gallery, made of large and bright exhibition rooms, and the Máximo Avilés Blonda Theatre, which has a capacity of 600 seats, and where we will host our anniversary. The cocktail reception following the performance will be held in the foyer of the Theatre.

You can access the Palace of Fine Arts and its two-levels underground parking through the Mahatma Gandhi’ street. In addition, Premium Valet Services will be available at the main entrance.

In January 23rd 2018, we had all gathered in the church Las Mercedes in the Colonial Zone for an event which was, according to all, unforgettable. Our students, overwhelmed by emotion, had performed their first concert in front of numerous prestigious guests. And Nemanja Radulović had amazed our guests. The standing ovations as well as the encore attested to the enthusiasm of the public for such early talents, and for the energy and sensitivity arising from children who had only been practicing their instruments for 7 months. They were also moved by how caring Nemanja and his musicians were towards the children. Let’s all remember the highlights of that evening through the video below.

If you wish to be a our Anniversary Concert of Jannuary 23rd, 2019 in the Fine Arts Palace of Santo Domingo, we offer you 3 options:

Once your transaction realized, we will contact you to coordinate your tickets delivery. We provide tax credit invoices to companies.